I came up with this concept for students who were stressed out trying to learn jazz standards and having to deal with learning endless numbers of chord forms and alterations. I told them if we lowered the bar from “total perfection” to “not obviously blowing it”, we could get by with the 6 forms below, (actually 8 forms as I will explain). If you have read the previous 2 posts on chord names and simplification, you will notice I am just showing the basic 7th chords, the first 3 forms; major 7, minor 7, and dominant 7, are “jazz fakes” while the diminished 7 is a standard voicing. What makes the first 3 forms “jazz fakes” is the fact that they only contain 3 notes. Since a 7th chord contains 4 notes I must have left a note out, and I did! I left out the 5th, which leaves the 1st, 3rd, & 7th. These are the minimum notes that can define a 7th chord.* In the previous 2 posts on chord names and simplification I showed that all chords exist along a spectrum, from simple to complex. Even a 13th chord is basically just a 7th chord with a few extra notes added. So just ignore them! Major 13? Play a jazz fake Major 7. Minor 11? Play a jazz fake minor 7. Dominant 9? Play a jazz fake dominant 7. What about alterations?( all the #5’s and b9’s, etc.) Ignore them! That’s why I left out the 5th; sharp 5, flat 5, who cares? You don’t even have a 5! That scary Dmin9b5? Play a jazz fake Dmin7 instead, it works because you don’t care! You aren’t playing that complicated alterations/additions game, you’re faking it! A lot of people think the fakes sound better, after all the more complex a chord is the weirder it sounds to most. Just ignore the fancy stuff and play the fakes. Major anything, play a jazz fake Major7. Minor anything, play a jazz fake minor7, etc. Take this example:

Below are the 6 jazz fakes, Type 1 (6th string root) and Type 2 (5th string root). Since diminished chords can’t go beyond a 7th chord, there’s no need to fake those. What about 6ths? Play a major chord. Augmented? How many of those will you see? If you can’t ignore it play a Dominant 7. This is slacker jazz! 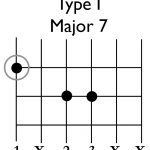 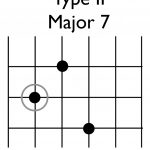 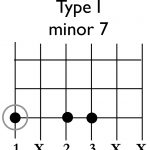 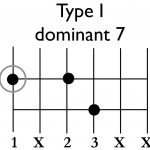 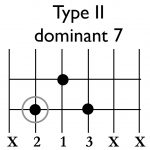 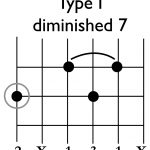 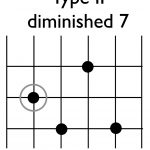 *All of this is explained in more detail in my book, “No Fail: for guitar” available on Amazon.