In this post and the next we will learn how to identify keys
entirely visually, without having to memorize anything. Keys
tell you what chords and scales work together and are quite
useful. You can use them to figure out songs, compose, or
jam. Just knowing what scale you’re playing will give you a
list of chords to use. Playing 2 or 3 chords can tell you what
scale to play when you solo, and changing keys is easy, just
a chord by chord substitution. You’ve probably noticed that
most songs you play contain 3-6 chords total, just arranged
differently for the various parts. This because they are in a
key, which contains a total of 7 chords plus a scale. Over the
past 6 posts you have learned enough chords and scales,
now it’s time to learn how to put them together and use
them! (Again, a more complete explanation of keys, visual
and otherwise, along with practical methods for their use
is available in my book, “Take Control: for guitar”, available
on Amazon.)

that work together. The 2 main types of keys used in popular

major keys starting on a different root, the same as scales.

Here is the key of A Major…

-The left column lists the scale notes. Scales are used to

boardists all use the same scales. The scale you have

learned is a pentatonic scale, which is a little more basic,

but it contains the same notes (minus the D and G#),

and will work fine. If you’re interested in the full major

scale, here is position 1 filled in(it has the same roots as 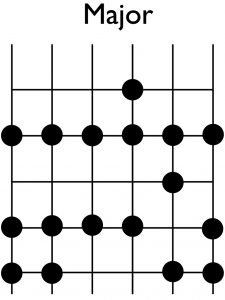 -The middle column lists the chords. Chords are used to

play harmony and are used by keyboardists and guitarists.

You have learned to play 2 versions of all possible major

and minor chords and no version of a diminished chord.

Diminished chords sound nasty and are mostly used in

classical and jazz as passing chords (how many have you

played?) Look one up if you want, I can’t show you every

-The  3rd column lists the 2 main modes in the key. This

F# minor! Just like your scales, the keys themselves are

both major and minor, just played from different roots.

on the 5th fret/6th string, you will see the minor root is

F# on the 2nd fret/6th string just like the example above!

The only difference between the key of A major and the

be the root. In the key of A major the 1st chord ,A is the

considered the main chord. As long as your jam focuses

key and you will be in that mode/key. (Some chords will

work better than others, experiment!)

-The 4th column lists the degree numbers. Pros refer to

the chords in a key by Roman numbers, the 1st chord is

a I, the 2nd chord a ii, etc. Upper case numbers mean

use Roman numbers instead of regular chord names

is to change keys easily! Any I vi IV V chord sequence

is the same sequence for any key. This will make more

sense when we look at the key shape diagram below.

While all the above information is useful to know, you

can see the problem; there are 11 more keys, one for

each note in the chromatic scale, and they all have the

same amount of information and they’re all different!

With each key containing a 7 note scale, 7chords and 2

modes this adds up to 192 bits of information, which

is a lot to remember. Then there’s the obvious question

of how so many self taught musicians manage to write

songs and jam in key without knowing exactly what a

key is. The answer is they play by picture, both the

guitar and piano can be understood visually, this is

why the vast majority of self taught players play guitar

piano or both. We are already playing chords and

scales without knowing all of the theory involved, so

learning the sequence of chords in a key visually is

just the next step. Below is the visual diagram of both

the major and blues keys along with the root notes on

top diagram on the right shows the location of all the

chords for any major key, the bottom diagram is for

the blues key shape, which we’ll talk about in the

next lesson, ignore that for now. Notice the degree

names instead of fret or chord names. This is what

allows us to play chords in any key. 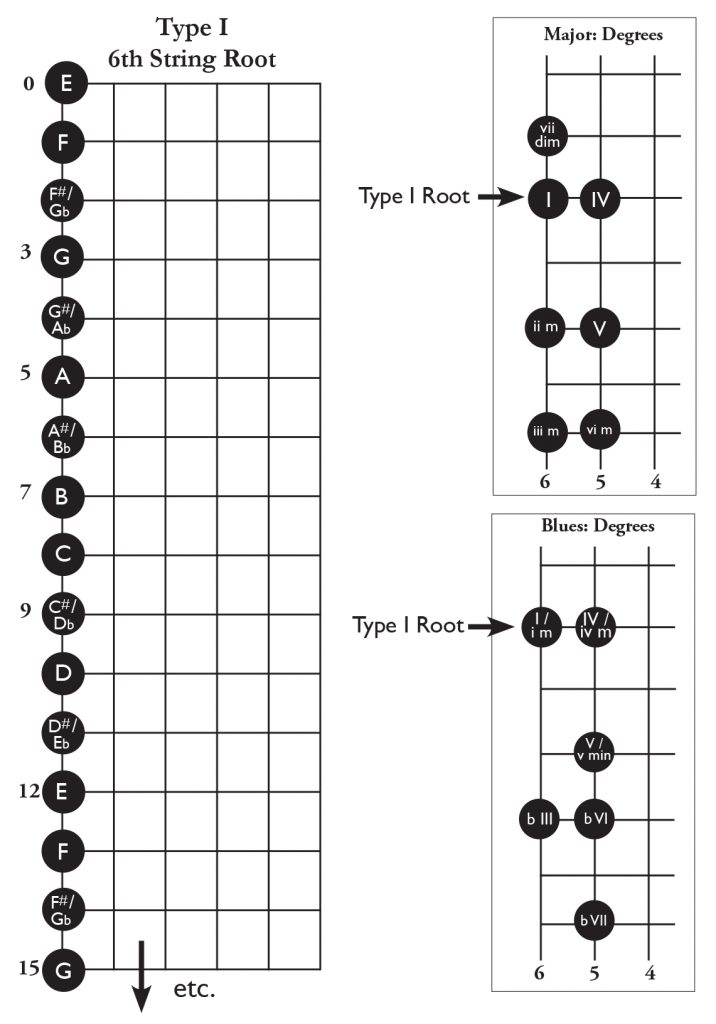 chords for that key. Need the chords for F major key? Move

all 7 chords in the key of F; just match the degree numbers

with the chord names for that fret. (1st fret-F major, 3rd fret

will be there! The next post will explain the blues key shape,

which is vital for about half of all popular music.